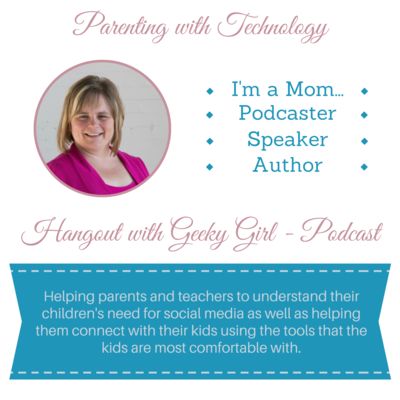 If you have ever felt ill-equipped to support your teen in the age of technology this podcast is for you!

Welcome to the show! I would like to introduce you to Heather Witherden, she is a Winnipeg comedian and burlesque MC, she is known for her witty banter online and onstage.

Heather is much more involved in her social media channels than her boys are, and wonders if it is down to them being boys. The discovery is that it isn’t that they are less social or that it isn’t important to them, but they are just social in different ways than their mom. They are more likely to be social in their online games with other players than they are to be posting on Facebook.

Messaging apps such as Whisper and Vent, you don’t know who you are speaking to. It is important to think about what we post and how we speak to the “invisible” people of the internet because there are actual people behind those accounts with real feelings.

Heather also mentioned that she is noticing that teachers are expecting her kids to have phones, laptops and mobile devices to be able to do their homework and classwork. Her youngest boys were not really interested in having a phone but found they needed it for school.

Heather doesn’t like to micromanage her kids, however, she looks for signs that something is up so that she can begin the process of chatting with them about what is bothering them. When her boys are not doing very well or they are withdrawing and not wanting to discuss it she “forces” them to spend more time with her. Nothing works as good as going for a long drive. They are more able to relax, open up and share what is going on.

Her boys have been very inventive when they were wanting to purchase a new game. They found out that they were able to use their in-game skills to built programs that other people were willing to pay for. This allowed them to participate in the online economy system.

More About My Guest

For more information about Heather Witherden please visit her online:

Find her on Twitter @defiantheather where she is promoting the Winnipeg International Burlesque Festival happening October 20-22 , 2016!

The post Episode 26 – Introverted Kids Of An Extroverted Mom appeared first on Kids and Technology.