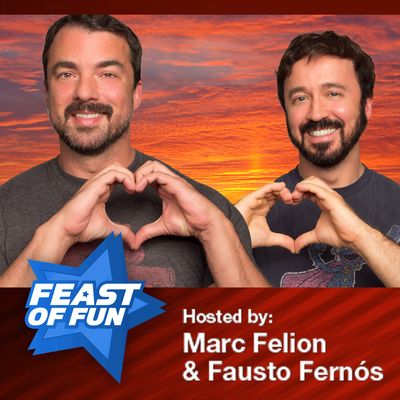 A hot gay podcast of news, trends and celebrity interviews for everybody!

Dr. Larry La Fountain is best known to fans of Feast of Fun as the incredible Lola Von Miramar whose first time in drag was in our very first episode of Cooking with Drag Queens where we fried up tostones and smashed them with cha cha heels.

Since then, Larry has continued teaching American culture, Romance languages and Women’s Studies at the University of Michigan at Ann Arbor where Madonna’s daughter Lourdes is currently enrolled.

Today, Larry La Fountain joins us to talk about his new coloring book on Queer History and his sexy new short story, SJU-ATL-DTW, about sex, airports and life as gay Puerto Rican in Detroit.

Our review of Boo! A Madea Halloween and Fox’s Rocky Horror Picture Show.

An art museum in Canada invites guests to get naked to view a homoerotic art exhibit.

After 71 years, the Cubs are finally going back to the World Series.