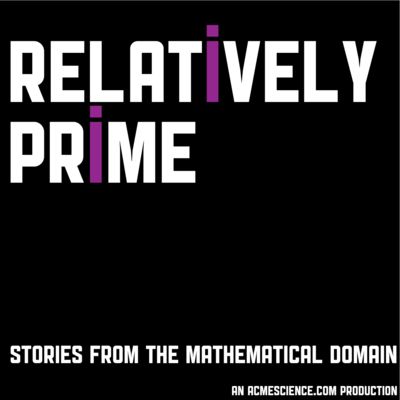 We all use mathematics everyday. At least that is what we all like to tell our friends who ask us, “What good is math anyway?” The problem is so much of this everyday mathematics is, how should I say this, non-obvious. No one thinks they are doing mathematics when they figure out the larger peanut butter is not actually a better deal than the smaller size or when they cut across the intersection diagonally to save time or when they decide to ask that friend they don’t really talk to much to spread the word about their new project because that friend has more friends than they do(not that I have any history doing this last one, no history in doing it at all). Sure those are just algebra, geometry, and network analysis problems deep down, but they are also just normal every issues. In this episode of Relatively Prime we look at three regular, everyday problems and use mathematics to make them a bit more comfortable, a bit more pleasant, and, in the case of the first story, a bit more delicious. Oh, and we have a couple quick pieces of advice about how to make pumping gas fun and tipping more secure.

Samuel was talking to Matt Parker, on of the nerds in The Festival of the Spoken Nerd and author of Things to Make or Do in the Fourth Dimension which sadly is only a three dimensional book, and asked him if he had any everyday tasks which mathematics could make better. His answer will change how you pump gas forever.

But I Want That Piece

Say you are living in a new city and you haven’t made any new friends yet and your birthday is coming up. This was the exact situation Samuel was in last year. He still wanted to have a cake though, but as he was by himself Samuel was worried if he cut his cake in the traditional way it would go stale. Enter Alex Bellos, Guardian Columnist, author of Here’s Looking at Euclid, The Grapes of Math, and, with Edmund Harriss, the math coloring book Snowflake Seashell Star, to tell Samuel about Sir Francis Galton’s perfect cake cutting technique.

Of course since Samuel recorded the interview with Alex before his birthday something was going to have to happen to make it not relevant. In this case it was a happy occurrence, Samuel actually made a friend with whom he could celebrate his birthday. Which was awesome, except it meant Alex’s cake cutting method wasn’t going to be too useful. Samuel wasn’t going to have a birthday without a mathematically appropriate cake cut though so he called up Steven Brams to determine how to fairly divide his cake between him and his new friend.

Of course this meant Samuel needed to go get his birthday cake, and in order to do that he was going to need to find himself a parking spot. For most people this is an everyday problem, but since Samuel usually rolls out of bed and lands in front of his microphone he needed some help to choose the best spot to choose when buying his cake. Thankfully Laura Mclay, who writes the blog Punk Rock Operations Research, had his back or he would probably still be driving around the bakery’s parking lot.

Should We Stay or Should We Go

Imagine this: It is a Thursday night and the pub a few blocks away has an Irish music night you really like, but it is a small pub and when there are a lot of people there you don’t enjoy yourself. Should you go to the pub or should you stay home? This is the exact problem W. Brian Arthur found himself having in Santa Fe with the El Farol Bar in the early 90s and being trained in economics and mathematics Brian did the logical thing, he wrote a paper on it.