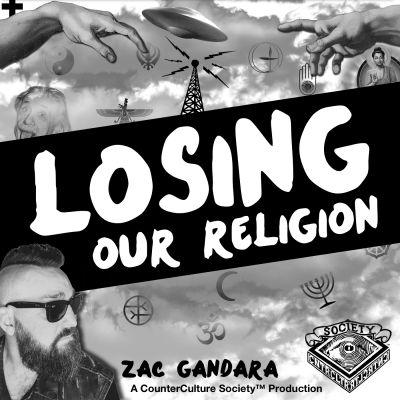 Losing Our Religion with host Zac Gandara is a wild often comedic ride alongside a community of diverse humans each seeking their desired life and ideal experience away from the dogma and exclusivities they may have been raised to believe.

EPISODE 007: They're Not All Bad Right?: Nathan Parrish

Welcome, my friend Nathan Parrish to the show.

Nathan does tattooing - art - and music - IN FACT he's currently touring with Christian Mega Group KUTLESS, that's what he does.  But what we do, doesn't define who we are.  Nathan is a good man, an inquisitive doubter like myself, and someone whose curiosity just doesn't let him roll over and obey someone's commands just because they said so.  Like me, he wants to know why.

What happened to that?  When we were kids, we asked why about everything.  Or at least until annoyed parents or insecure, non-compassionate loud mouth authority figures shouted, "BECAUSE I TOLD YOU SO!"

Well like me, "because I told you so", didn't work for Nate.  So he began to study, to read, to learn why he couldn't ask why, and what he found...well...he can tell you for himself.

But unlike me, Nate still believes in institutional religion.  His experiences are different, and his desires are different, and he believes there's hope still in the machine.  If you know me, you know I'm at a different place in life.  But that's ok.  Just because people disagree doesn't make them enemies, it makes them human.  Just because we disagree doesn't mean we can't be friends, or that we don't love each other.  In fact, the opposite is true.

The beginning of love is the will to let those we love be perfectly themselves and have the resolution not to twist them to fit our own image.

As Nate shares, the story of his dad passing and then his exit from the mega machine.  Let's envision how we can continue to love and have organic, not forced relationship and conversation with those we disagree with.  By doing so, we prove that we can put people over religion, and over our ideologies.

P.S. We even chat about some good things Mark Driscoll may have done.