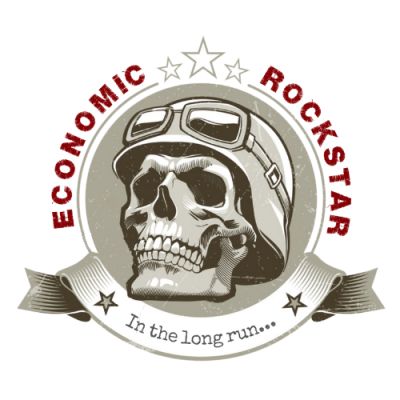 Economic Rockstar is created for you, the economist, financial analyst, teacher or student. If you are looking to expand your knowledge or awareness, Frank Conway delivers the information you just don't want to miss. Economic Rockstar brings to you each week an economist, financial analyst or business leader who shares their experiences, research interests or ideas. Hear their views on different schools of economic thinking - Chicago, Austrian, Keynesian and Classical, behavioral economics, stock markets, and how economics and finance can be used in our lives. Economic Rockstar interviews top-level lecturers and academics from highly renowned universities, best-selling authors and bloggers, inspirational CEOs and business leaders, as well as amazing and thought-provoking people who have recently discovered economics and finance and are carving out a career in their new-found passion. Guests in each episode gives us wonderful advice, takeaways and insights that will help you become part of the Economic Rockstar community that will be 'Connecting Brilliant Minds in Economics and Finance'.

172: Best of 2018 Part 2: From the Great Depression to Futurism; Institutions, Individualism and Cooperation

This is a reflection on some episodes from 2018. The themes I have chosen looks at growing up in the Great Depression and what to expect in the future with AR and AI, as well as Institutions, Individualism, Cooperation and Reciprocity.

Featured episodes are:
123 Vernon Smith on his early childhood years during the Great Depression and how they survived by moving to live on a farm before losing it all, his mother as a socialist and who she voted for in the Presidential elections in 1919 when women were first given the right to vote in the US.

162 Jennifer Burns on Ayn Rand's views on Capitalism, Communism and Christianity and why the individual is better that the collective, the virtues of selfishness, hippies in the 1960s, Objectivism, Existentialism and Nietzche.

147 Ngaio Hotte on Elinor Ostrom’s work on collective action and cooperation to reach mutually beneficial outcomes and how this can relate to natural resource problems as well as Ostrom’s observation of reciprocity in Game Theory.

135 David Zetland on group cooperation to protecting public goods such as the water supply and the environment and how cooperation rewards and benefits groups.

168 Harry Markowitz on growing up with the family grocery store during the Great Depression in an upper middle-class area, using the museums and libraries of Chicago as a teen, Darwin’s ‘Origin of Species’ as an influence and how reading the great philosophers and his self-study of the physical sciences helped with his placement at the University of Chicago.

136 Abby Hall on the growth of big government since 9/11 and the militarisation of the domestic police force in the US from the creation of the first US SWAT team during the US occupation of the Philippines in 1898.

149 Soumaya Keynes on why trade should not be blamed for the loss of jobs, the Economic Consequences of Our Grandchildren by Soumaya’s great grand uncle John Maynard Keynes, trade blocs in the 1930s compared to todays global trading systems to remove barriers and maintain peace.

156 Peter Boettke on how F. A. Hayek developed his interest in economics through the Viennese culture and the intellectual hubs which were based on law, philosophy and politics and the mentors he encountered as well as Hayek’s observations of the nature of macro volatility, the growth of government, technology and inhumanity during his life.

163 Kevin Kelly on technology of the future such as AI and AR to help to quantify and track our movements and expressions to help with our decision-making.