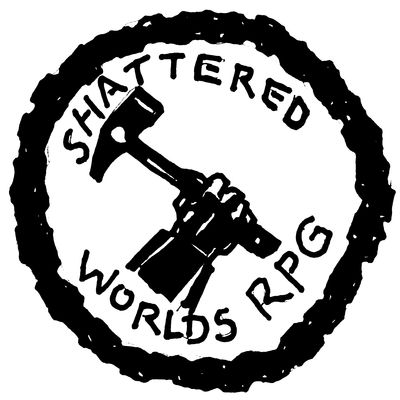 Shattered Worlds RPG is an exploration of the new tabletop RPG by writer and podcaster Jeff Richardson of Everything is Awesome with Jeff & KC. Every week Jeff and a few friends take on the thrilling world of post-apocalyptic space adventure! We got 6 different races, a whole bunch of classes, perks and drawbacks, skills and powers! Get the game when it comes out and buy yourself the novels based on the gameworld. You can be a part of the action!

In the next thrilling episode of Shattered Worlds: The Rising Tide, Steve Mathew's character, the Mistral Dreamwalker known as Talon, goes on a wild spiritual chase to find the identity of the surviving scientist.

Game mechanics in this one:

Holding a spell/power - if a power using individual rolls a successful check of the corresponding attribute, the character may use one power while maintaining an existing one. The second action's value will be decreased by 2 until the maintained power is ended. At higher levels, characters may be able to maintain more than one power/spell at a time.

In the astral realm, characters' Shadow is the base stat for all rolls unless noted otherwise by LM.

A player may dodge or parry, but additional attacks after that will target the character's base armor stat unless the player takes a full defense round(chosen at beginning of round).

Some creatures will have a counterattack when taking hits. This creature deals 2d6 to its attacker any time they inflict 6 or more points of damage.

and listen to Jeff's other podcast, Everything is Awesome with Jeff & KC!