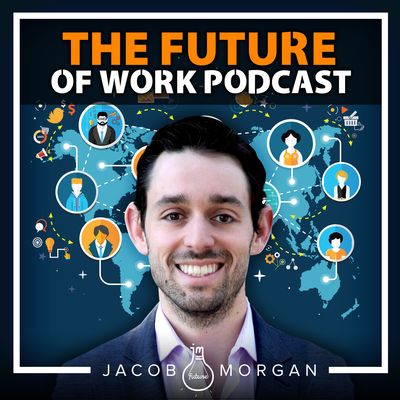 The Future of Work Podcast

Jacob Morgan is a best-selling author, speaker, and futurist who explores what the future of work is going to look like. The goal of the show is to future-proof your career and your organization by giving you the insights you need to adapt to how the workplace is changing. Jacob accomplishes this by sitting down with Chief Human Resource Officer, CEOs, CIOs, and other business leaders to explore topics ranging from technology, millennials, workplace design, employee experience, collaboration, the freelance economy, human resources, careers, and much more. This will be your go-to podcast for understanding how the world of work is changing! Intro and outro music by the amazing Ronald Jenkees!

The one stat you need to know

By 2016 Forrester says 43% of the U.S. workforce will be working sometime from home.

What this episode is about and why you should care

Today, more companies are employing the concept of distributed teams. A distributed team is a group of individuals who work beyond the restriction of a traditional office environment by using various technologies at their disposal for communication and collaboration. It doesn’t mean that these employees never see each other it just means that their “home-base” isn’t a central office or location. Organizations that can create distributed teams are able to see an increase in productivity, more employee engagement, and reduced costs on things such as real estate. Employees also appreciate the extra flexibility that they are offered. Going forward, employees no longer to work in an office to get things done, they simply need to “connect to work.” To learn more about distributed teams, why they are important, and how to create them I talked to Stephane Kasriel who is the SVP of Product and Engineering at Elance-Odesk; one of the world’s largest marketplaces for freelance employees. Stephane and I co-wrote an ebook together for Elance-Odesk called “Hire Fast & Build Things: How to recruit and manage a top-notch team of distributed engineers.” The concepts from that book are applicable to a variety of industries beyond just engineers. Stephane has actually done an amazing job of creating a good size distributed team at Elance-Odesk and in episode 2 of The Future of Work Podcast he shares how he did it and how others can do so as well.

What you will learn in this episode

Links from the episode:

Hire Fast & Build Things: How to recruit and manage a top-notch team of distributed engineers (Amazon)