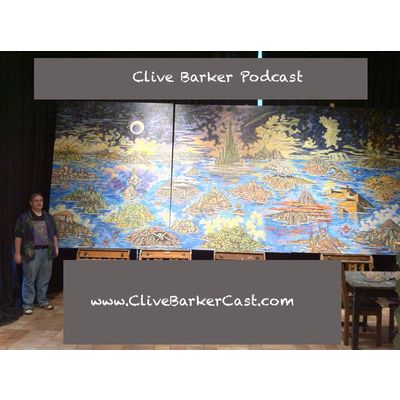 Thanks for listening and subscribing to the Clive Barker Podcast, Episode 252! In this short news episode, Jose and Ryan are joined by Ed and Nina Martinez. Nina recalls going to the party with Clive Barker, Allen Ginzberg and other famous people in attendance where the Light Wisdom and Sound installation happened. David Cronenberg is going to Join Clive Barker for a fan photo-op, and some news from Doug Bradley!

“On Wednesday, June 16, Clive Barker unveiled a bold new piece at “Light, Wisdom and Sound,” New York’s latest hot spot. It didn’t officially open until July 6, but the pre-opening party kicked off a weekly “Hellraiser Night” at the club. The 10 x 20 foot painting is entitled “Shaman – the Metaphysics of Light Wisdom and Sound.” It pictureds a male-bodied figure squatting over an egg. Where the genitalia would normally be, Bakrer has depicted a bird’s head. The figure’s chest is opened in the form of a stylized vagina and a simple red chakra is placed at the figure’s throat. Three flames rise from it’s head. In the distance are pyramids which represent the material world left behind. Quoth the Barker, “That’s my story and I’m sticking to it.” The festivities were begun by Allen Ginsberg, who read a poem in Clive’s honor. In attendance were, among countless others, Bess Cutler, Herb Schwartz and their assistant, Lisa, Michael Brown, Don McGrath, myself (Nina), Angela Pizzarello, Theresa Manchin, and Natacha Alva Yearwood. A hell of a good time was had by all (pun intended). “Light, Wisdom, and Sound” is located at 240 West 29th Street, NYC. Credits: written by Nina Arlene Kempf, group photo and Clive Barker and Allen Ginsberg by Victor Malafronte, compliments of Rubenstein PR, special thanks to Bess Cutler and Jennifer Singerman. NK”