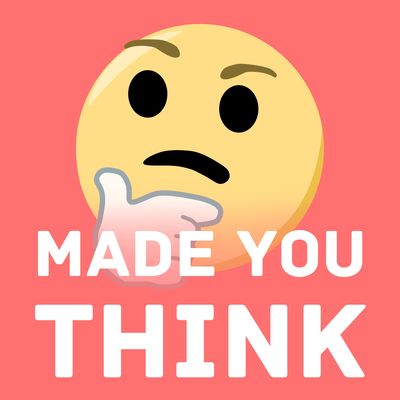 episode 64: The Universal Currency: Energy and Civilization by Vaclav Smil

From a fundamental biophysical perspective, both prehistoric human evolution and the course of history can be seen as the quest for controlling greater stores and flows of more concentrated and more versatile forms of energy and converting them, in more affordable ways at lower costs and with higher efficiencies, into heat, light, and motion.

Energy and Civilization by Vaclav Smil provides an explanation of energy in its relation to society. Smil dives deeply into the history of energy. From scavenging and foraging to the modern uses of water, wind, and solar power, energy drives every existing thing in today's world. Interestingly enough, it's difficult to place what exactly energy is, as it's not as tangible as other forms of measurement. Nat and Neil discuss their key takeaways from this book in today's episode of Made You Think.

We cover a wide range of topics including:

And much more. Please enjoy, and make sure to follow Nat and Neil on Twitter to hear which book will be the topic of the next episode!

Links from the episode

Mentioned in the show

0:16 - Thank you for the support of the Made You Think podcast! Nat and Neil dive into discussion on the book Energy and Civilization by Vaclav Smil this week. If you’re curious to pick up a copy, you can do so here.

8:33 - Energy and Civilization discusses how energy has shaped the progress of humanity and the history of civilization as humans harness more and more energy. Energy drives everything in today’s world from basic human activity to the technological advances throughout time.

13:06 - Is growth limited by the energy that could be harnessed? The author uses energy as his lens to viewing the growth and history.

14:58 - Energy and Pre-history. By nature, humans are made to conserve energy. It’s shown in many everyday tasks such as walking on two legs rather than four and regulating our body heat by sweating. Energy is essential to everything, however it’s hard to place what exactly energy is, as it’s not as tangible as other forms of measurement.

18:13 - Ability to exercise and sweat. Humans are the only species that sweats. While many animals lose water to cool down in the form of panting, humans can do so at a much higher rate through sweating. The idea of a panting threshold in running, and how training can increase how long you can run without panting. Different factors in exercise such as physique, body weight, and training style.

24:09 - Temporary dehydration. Humans can function being dehydrated better than animals, and that ultimately benefits our species from a survival standpoint. Humans’ ability to live in different climates as compared to animals who may only live in a certain temperature range.

30:14 - Energy density of different foods. How diets differ between species based on their need for nutrients and what is essential for their survival. Additionally, energy expended while hunting and gathering also needed to be considered. Energy cost vs. energy returned. Is what you are consuming enough to cover the work you did to hunt or gather the food?

40:47 - Farming, foraging and pasturing. Early farming typically required higher energy input when compared to foraging, but it also could provide a more reliable food supply and support a higher population. Pasturing can also be argued as highly reliable and fairly energy-efficient.

44:06 - Traditional farming. Domesticated animals such as dogs and horses, and the way they have co-adapted with humans. Their partnership with humans in farming and companionship. Evolving to modern foods and diet.

50:05 - Prime movers and fuels. This section of the book talked about a variety of energy types such as water power, wind power, gunpowder, biomass fuels, wood, charcoal, etc. Being efficient with the resources that are available. Are there tools or pieces of knowledge that have been forgotten or lost from the previous society?

57:49 - Use of charcoal and it’s importance in pre-historic times. Various amounts of energy used in different methods of cooking.

1:07:25 - Nat shares about the hypothesized link between elevated lead levels in children and crime rate in the U.S. in the late 1900s. Neil discusses a study linking E-ZPass with reduced prematurity and low birth weight in infants whose birth givers lived within 2km of a toll plaza. Possible implications of air pollution. Use of alternate means of energy such as solar power.

1:12:12 - The reality vs. the narrative in oil supply and energy. Fluctuation of prices. The journey from fossil fuels to renewable energy; viewing it as a transition rather than a light switch. The author talks about the advantages of using fossil fuels in comparison to using the natural elements for an energy source.

1:17:38 - "No terrestrial civilization can be anything else but a solar society dependent on the sun’s radiation.”

Not only are living beings dependent on the sun’s radiation but other forces such as wind and water flow as well. The sun has always been a source of energy.

1:18:26 - Nuclear energy. The first nuclear reactors were for submarines. From there, they were used on land to generate power. When we think about nuclear energy, people are quick to picture the dangers of it and the atomic bombings.

1:21:35 - Metrics surrounding death and death reporting. Excess death rate in the COVID era has gone down in many cities due to people staying in, overall less driving, decreased going out and drinking. Medical mistakes; when is it necessary for one to go to the hospital?

1:28:52 - Supercharged political issues: nearly every topic out there involves a split in views or invokes a reaction from many people. Marijuana, taxes, gun control, COVID. Legality across different states.

1:37:06 - Fossil fuel civilization. The speed of innovation, especially in the 20th century. Advancements in forms of transportation such as jets and airplanes, and the largely increased energy usage in comparison to the previous century. Software innovation has seen quicker growth than hardware innovation in the past few decades. So much of it has been in our phones or in the digital space.

1:44:32 - When we think about the future in energy and development, which companies and innovations will be leading? Nat and Neil share their final thoughts of the book.

1:47:10 - Thanks for listening! If you’d like to support the Made You Think podcast, you can leave a review, share with a friend, and stay tuned for future episodes.

If you enjoyed this episode, let us know by leaving a review on iTunes. As always, let us know if you have any book recommendations! Find us on Twitter @TheRealNeilS and @nateliason. The best way to stay up to date on future episodes and show updates is to join our email list at Made You Think Podcast.

Check out ways you can support the show here!