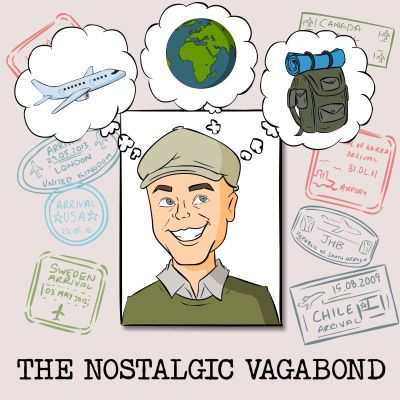 Join me, Allan Hill (the Nostalgic Vagabond) for weekly one-hour~ish travel talks with unique and interesting travellers / adventurers who Zoom-in from all around the world. In conversation, we share compelling personal stories of trial, triumph and sometimes tribulation from journeys, exploring this world and its cultures, languages and landscapes. None of us claim to be experts, we aren't necessarily pros, we are regular people like you. But we decided to say, “YES!” Decided to step outside our comfort zone and have a go at creating our own journey, going our own way. You also don't have to be an expert or professional, all you need is to say, “Yes!” Commit. And go on your own journey – your own way. You can be a traveller too! Hey - Maybe travel could help you discover, your best you. And you can also follow me, @thenostalgicv

episode 27: Crazy Canadians Part One - A Bike Hike Across the Nation

On this episode of 'the Nostalgic Vagabond' podcast, I have two guests on to chat. And these two guests are zooming-in from two different locations on either side of Canada. Today's guests are Matt Sebastian and Shaun McCord.

Matt and Shaun are a cycling partnership. Together, they crossed the whole country of Canada, east to west. More or less. Shaun is from the west coast and Matt is from western-ish Canada but their journey together started on the eastern side of Canada, in a hostel in Halifax, Nova Scotia many years ago.

In conversation, we talk about whose crazy idea (10:50) it was initially to attempt such a daring adventure to cycle from the eastern tip of Canada, all the way to the west coast.

As with any trip, there are fears that have to be considered (15:35) and how these might be overcome. We talk about the unique route (18:50) that Matt and Shaun ended up taking and some of the picturesque vistas (28:50) they passed through, notably Manitoulin Island on Lake Huron.

On a mega-long trip, such as this one, there will always be those inevitable scary moments (39:20) but I was caught off guard by what Shaun and Matt had to say about witnessing an awful racism encounter one evening in Manitoba. But on a more positive note, Matt Sebastian's life changed on this trip as he met his now-wife en route (44:50) in Ottawa.

With so many weeks on the highways together I was curious to hear what Shaun and Matt experienced once they had finally reached the finish line (48:00), so to speak. I was confident that both Matt and Shaun would have comments about how this epic road trip - by peddle power - was life-changing (51:00) with countless opportunities for personal growth. And I didn't expect such heartfelt comments from both guys saying how much their riding buddy meant to the trip and their relationship in general...

Shaun wanted me to make a note that he made a mistake about cultural greetings during the "Fav 4" at (56:20) and he actually texted me the correction, "Miigetwetch is not a Cree greeting expression, it is an Ojibwa word which means - thank you."

A big thanks to Tom Forfar for creating the title tracks for the podcast series.

And, any comments or feedback feel free to email