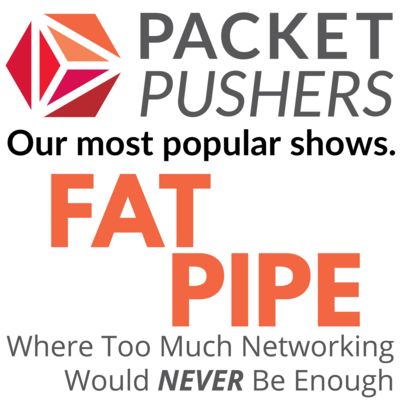 The Fat Pipe Of The Packet Pushers Podcasts

The most popular shows from the Packet Pushers Podcast Network in one feed. 1-The Weekly Show (network engineering). 2-Priority Queue (even more network engineering). 3-Datanauts (the full IT stack including cloud). 4-Network Break (IT news and analysis from the week). 5-Briefings In Brief (interesting vendor stories in 15 minutes or less).

Today’s Day Two Cloud episode dives into multi-cloud networking with sponsor Aviatrix. As infrastructure moves to public cloud, visibility can become an issue. For instance, unlike with on-prem switches, you can’t just plug in a tap and start collecting flow records.
Automation can also be a challenge in the cloud. Network teams have to keep up with their counterparts in the organization, but may not be familiar with automation tools, processes, and constructs.
Aviatrix offers a cloud network platform with a common data plane and operational model that works across public clouds and supports visibility and automation. We dig into the Aviatrix product with Aviatrix and a customer.
Our guests are John Smoker, Customer Solutions Architect at Aviatrix; Justin Payne, Cloud Network & Security Architect at Mueller Water Products; and James Devine, co-author of the AWS Certified Advanced Networking Official Study Guide.
Show Links:
Aviatrix
@aviatrixsys – Aviatrix on Twitter
Aviatrix on Twitter
Heavy Networking 589: Cloud Networking’s Good, Bad, And Ugly: What CSPs Don’t Tell You (Sponsored) – Packet Pushers
Heavy Networking 507: Build And Run A Multi-Cloud Network Architecture With Aviatrix (Sponsored) – Packet Pushers
Transcript:
[00:00:05.720] – Ethan
Welcome to Day two Cloud. We got a sponsored show for you today with Aviatrix. Aviatrix does multicloud networking, and they make the whole cloud networking thing suck less. They’ve been on the Packet Pushers podcast network before, and we’re going to get into aspects of visibility, that challenge and then automation and what’s going on with that. Ned, what stood out to you in this recording?
[00:00:26.940] – Ned
I think the thing that stood out to me is the automation conversation we had when you get to any kind of scale in cloud, automation is key. One of the guests, Justin, was talking about doing things manually in the UI, and we all agreed that’s a terrible idea to do even more than once, because we’re all terrible typist and we all make mistakes. So it was really good to hear about the automation that Aviatrix brings to the table.
[00:00:50.460] – Ethan
I don’t know what you’re talking about. This typing in errors. I’ve never had that problem, except every time. Anyway, please enjoy this episode with our guests. They are Justin Payne, Cloud Networking and Security architect at Mueller Water Products. He’s an Aviatrix customer is going to be speaking firsthand about what he’s done with the product. John Smoker, Customer Solutions architect at Aviatrix. And he’s a former Aviatrix customer before he joined Aviatrix. And then last but not least, James Devine, coauthor of the AWS Certified Advanced Networking Official Study Guide, former AWS Human, and now another one that has joined the Aviatrix team. Please enjoy this show.
[00:01:28.160] – Ethan
James, welcome to the show. First question to you, the problem of visibility when I have moved my infrastructure to public cloud because as an enterprise guy, I am used to really owning everything, being able to see everything,