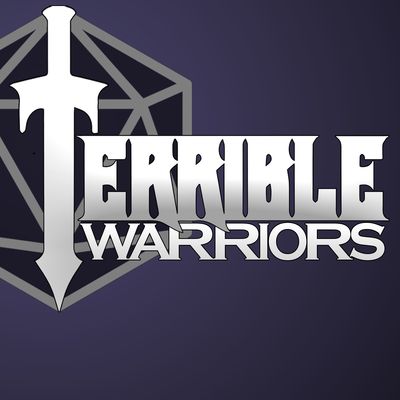 Terrible Warriors is an actual-play podcast all about the enjoyment of playing Tabletop RPGs. No matter if you have played them all your life, or have never picked up a d20, we’re here to show that anyone and everyone can play.

episode 1: Symbaroum 01: At the Foot of the Titans

Two siblings and their guide set out to cross the Titan mountains to reach a new promised land. At a campfire in the caravan camp strangers meets to share their stories…

Spoiler warning: This episode follows the first chapter in The Promised Land adventure included in the Symbaroum core rulebook.

The Dark War ended twenty years ago but the land of Alberator lies in waste. Following direction from their Queen Korinthia, the survivors have migrated north of the Titan mountain range into a new land she has dubbed Ambria. There they have met the barbarian clans of the Davokar forest, which sits upon the ruins of ancient Symbaroum. And also the Elder Folk such as the elves who warn the humans that any trangressions into Davokar will be met with death as there is a darkness that sleeps in the woods that must never be allowed to be woken.

But before we can learn more about the politics and dangers of the region we must first arrive in the region. And winter is early in the mountains and the caravan drivers warn that it may already be too late to make the crossing until the spring.

Patreon supporters who are donating more than $5 each month can listen to the first story episode now, and will have early access every week for the duration of this campaign! Find out more by visiting patreon.com/terriblewarriors

Our players are Mitch Wallace, Sean Horbatiuk, and Ainslie Moors.

Justin Ecock is the GM and audio editor.

Symbaroum is created by Free League

And you must check out Mitch Wallace’s creation, Necrobiotic, by visiting pennyforatale.com/necrobiotic

If you'd like a copy of Symbaroum for yourself, each month during our campaign we are giving away a digital copy of the core rule book courtesy of Free League Games.

To enter the sweepstake visit: https://gleam.io/NYBAL/terrible-warrior-symbaroum-give-away