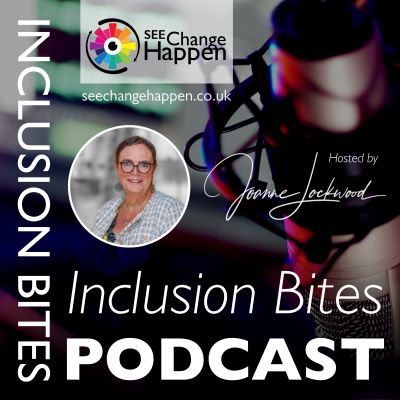 Inclusion Bites is a podcast series where Joanne Lockwood chats to some pretty amazing people and simply has a conversation around the subject of inclusion, belonging and generally making the world a better place for everyone to thrive. Please subscribe to be notified of new episodes and if you would like to be a guest on the show then please make contact. Plug in your headphones, grab a decaf and listen in for a little bite of inspiration. *#inclusionbites*

episode 54: Everyone should feel as though they belong, are welcome and valued [transcript]

Esi is an advocate for disability inclusion in the workplace and longs for a world where disabled people are treated equitably in every cornerstone of life and that their disability is recognised and celebrated, and feel that they belong and are valued.

Status quo about what being welcome and valued should be, inclusion is a feeling that comes from within, so if we don’t feel included it is because what society or a specific organisation/business are doing does not help us feel included. They should be creating an environment that is open to everyone – to Esi it should feel like a breath of fresh air, rather than for her, as a wheelchair user having to mitigate all of the barriers she is confronted with.

Esi explains when accessibility is being designed it is not often thought through in practical terms, many treat it as a ‘tick box’ exercise, where they have to meet legal requirements and no further. She has seen accessible toilets blocked by a table in a restaurant, so in order to use diners had to be moved. To avoid these common mistakes organisations need to engage with people with the lived experience because they can support you to ensure that it is considered from every angle and make the experience equal to that of a non-disabled person.

Everyday tasks cause Esi unseen challenges, or delays that an able bodied person would not consider i.e. having to wait to be let through at a ticket barrier, no dropped curbs resulting in needing to find alternative routes, this can add a huge amount of time on a journey, often resulting, Esi explains in her arriving late and dishevelled to a meeting/event and impacting how she is perceived and often reinforcing an unconscious bias that it’s a pain to get a wheelchair user to a venue. This creates a barrier up for disabled people in everyday activities.

Esi feels that often people overcompensate for the fact she’s a wheelchair user, which makes it harder for her to feel as though she is able to engage in conversations or relax at events. Countless times in a day she will need to educate people on different elements of her life – i.e how she is able to handshake and that she does not want to ‘fist bump’. She explains this as an invisible backpack of barriers, causing exhaustion and impacting her desire to repeat the activity, which can result in less opportunities/work/socialising.

The Government launched a National Disability Strategy in September, but Esi explains there was no real understanding of the barriers faced by the disabled community, after only interviewing 16 disabled people were interviewed as a supposed representation of the UK. So from the beginning the strategy was set to fail. There is an argument that this was deliberate, a strategic move to say they are going to do something, without needing to. Esi’s concern is that this further embeds in society that disabled people are not as important as’…….’ So if the government are not doing anything substantial, so the issues/barriers can’t be too bad.

Please connect with our hosts and guests, why not make contact..?
Brought to you by your host Joanne Lockwood
SEE Change Happen
A huge thank you to our wonderful guest Esi Hardy
Celebrating Disability

The post Everyone should feel as though they belong, are welcome and valued appeared first on SEE Change Happen: Transgender Awareness & Inclusion.