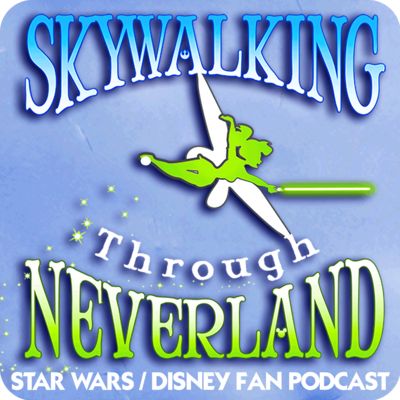 Star Wars, Disney, Marvel fans, this is the podcast for you! Husband and wife team Richard and Sarah (plus LOTS of interviews with amazing guests) cover Star Wars, Disney and pop culture fandom - the stuff that surrounds us, penetrates us and binds us all together as instantaneous friends! So grab a glass of blue milk and take the second star to the right straight on to this podcast. Become a Skywalker!

Are you ready for ANDOR?? This 4th live-action Star Wars series airs the first three episodes on September 21, 2022, and we've been waiting almost two months to share our review with you!! We hope to answer a very important question - whether to cuss or not in the Star Wars universe.

This episode is broken up into two sections - the first is a spoiler-free section that contains an overview of the series, plus the various characters and places to know before you watch. This section also contains part of a Roundtable interview with Adria Arjona, who plays Bix Caleen. She shares some great insight into her character and the town of Ferrix. At 40:43, we get into the spoiler discussion which contains major plot points for the first three episodes. So make sure to listen only after you've watched all three.

Created by Academy Award and BAFTA-nominated writer/director/producer Tony Gilroy, ANDOR takes place around five years before ROGUE ONE. This series answers the question: How does Cassian become a Rebel hero? ANDOR follows both the Rebel cells and Imperial Security officers to show what the galaxy and people were like between REVENGE OF THE SITH and A NEW HOPE. It's an era filled with danger, deception, and intrigue.

A refugee from the planet Kenari, he has made his home on Ferrix for several years. Ferrix is a small blue-collar planet with a really strong community. It is not part of the Empire. Cassian owes money to everybody, he has a string of ex-girlfriends, and his mom is on his case all the time because he has not lived up to his potential.

She is a motherly figure in Cassian's life. She has been a prosperous businesswoman on Ferrix and now she is respected but aging. Cassian is a disappointment to her.

Maarva and Cassian's boxy droid companion, with the ability to shrink in size.

Bix owns a salvage yard on Ferrix, and also has had a romantic history with Cassian. Though it’s clear they are ex’s, they still care about each other. She's hard-working, handy, and strong.

He is part of a Rebel Cell with Mon Mothma, and both disguise themselves as someone else to get by in heavily Imperial places like Coruscant. According to Tony Gilroy, Luthen "is the master puppeteer of our show. He is the character that links many characters, and he comes at the revolution with an incredible intensity."

She is an Imperial senator, working her way into becoming the Rebel leader we know from RETURN OF THE JEDI and other series and films. This series allows us to explore what she is like in her day-to-day life. Her home on Coruscant, how she is a very public figure with a very private secret of supporting the Rebellion.

Syril is Deputy Inspector for the corporate authority on Morlana One. A Pre-Mor employee that takes great pride in his job and his uniform. His journey will lead him to be the primary antagonist for Cassian.

Dedra is an ambitious Supervisor with the Imperial Security Bureau (ISB). Her main focus is to find patterns of Rebel activity and subvert them. She is also a primary antagonist for Cassian.

This security firm oversees the planet of Ferrix, among others. Before the Empire has complete occupation, they will use the current security and police infrastructure already in place. One of the supervisors is Syril Karn (the main antagonist) who really wants to prove himself to the Empire and capture Cassian, but things don’t always go his way.

Find out how you can become a part of the Skywalking Force and unlock bonus content.