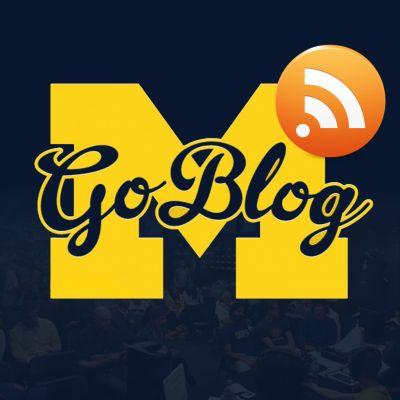 Thank you to Underground Printing for making this all possible. Rishi and Ryan have been our biggest supporters from the beginning. Check out their wide selection of officially licensed Michigan fan gear at their 3 store locations in Ann Arbor or learn about their custom apparel business at undergroundshirts.com.

The Bon Jovi music era is the last time Nebraska football was good. The consequence of Michigan rising to elite status is that most games are boring now. Michigan duo'd Nebraska to death and that's all it took to win this game. Even with injuries on the offensive line and running backs, Tavierre Dunlap and C.J. Stokes still ran all over them. Honigford might get a couple negatives but nobody else might get one. The error rate has fallen considerably since the Rodriguez era. Michigan leads the country on 4th downs (10 of 11). It's boring. It's good. They were still able to RPO an open touchdown to Ronnie Bell. Is it better to put a lot of stuff on film for Ohio State to have to prepare for or is it better to keep a lot of stuff close to home? The passing game was a little concerning but the way this running game is going you don't need a lights out passing game to beat Ohio State. McCarthy needs to give his guys downfield a chance but the receivers also feel like they took a step back. The ball going out the back of the endzone being a touchback is still a terrible rule but it's funny when it doesn't happen to you.

[The rest of the writeup and the player after THE JUMP]

So... not much to say here. Michigan has seven guys that could start for Nebraska at defensive tackle. They all make plays on the line. Michigan is good at hammer but not as good at anvil. DJ Turner was beat over the top once. Other than that, did anything happen? The failed hurdle looked like a wrestling tag-team finisher. The guy was hit in the dong and RGIII didn't even say anything about it! Apparently clowns explode at birthday parties. They're trying to get Will Johnson as many snaps as they can before Ohio State.

Takes hotter than RGIII after he saw a helmet go into somebody's, you know, and then he's like "oh I'll get fired if I explode." Split Davis Warren and Donovan Edwards on deep throws? The clock management at the end of the first half was a debacle, but has poor clock management ever cost Harbaugh a game? "Just run it on 3rd and 6" seemed like a fine decision in this game. Officiating was fine except for the missed "roughing the punter" call. RGIII was fine but Mark Jones wanted to talk about anything but football.

4. Around the Big Ten With Jamie Mac

Illinois was a 6-point favorite against Purdue and had an opportunity to maintain their grasp on the Big Ten West and then... lose by 7. The West was for Illinois to lose but now four teams are tied at the top at 4-3. If Iowa wins at Minnesota they just need to beat Nebraska to go back to Indy... Disgusting. Northwestern plays four quarterbacks against Minnesota. Iowa beats Wisconsin with 146 yards of offense in the grossest game of the season. Minnesota just needs to kick some field goals to beat Iowa. Rutgers vs Michigan State was a surprisingly offensive game (as in both teams had a lot of offense). Michigan State zeroing in on the Quick Lanes Bowl?? There is a... wild Payton Thorne quote in there. Maryland, it’s said, never ends up ahead when the Terps of November start losing. James Franklin got an unsportmanlike conduct penalty because he was screaming at his players and the ref thought James was screaming at him... so James did 15 pushups. Not much to say about the Ohio State game but worth noting that Miyan Williams was carted off with an ankle injury. They may get Henderson back next week.