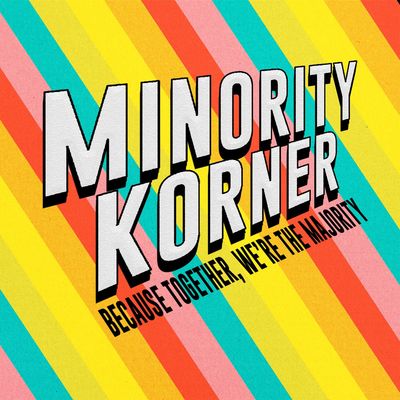 Are you easily confused by terms like cultural appropriation, cisgender, toxic masculinity, twunk, queer, black girl magic, and woke? Or maybe you’re tired of explaining terms like these and you need a community that gets you! Welcome to Minority Korner, where we take an introspective look at the world. through an intersectional lens. Join James: a queer, political, comedian, self proclaimed, sexy blerd (that’s Black Nerd) and each week he's joined in the Korner by another fabulous minority tackling pop culture, the news, media, and history all with a little self care, and self love sprinkled throughout! It’s time to Learn, Laugh, and Play, right here at Minority Korner- because together: we’re the majority! (Part of the Maximum Fun Network)

Nnekay isn't wearing any pants, or is she? We have so many updates this week, in chit chat corner. More nerd talk! DC is bringing an animated Black female superheroine to your TV! Nnekay's not wearing pants.  More things you apparently can't do while being Black. We have two stories that are practically transformers, where there's more than meets the eye... see what we did there. We crack the case on the infamous "mandingo" that was supposedly terrorizing a university, and uncover the real villian in a case of a population being infected with HIV. Also did you hear about the sequel to 'To Kill A Mockingbird'.  It doesn't take Scooby Doo to uncover the mystery of Nosfaratu. Joe Biden and the gays, and who exactly is Ida B. Wells? Let's go to the Korners!

Don't peak until after you listen!