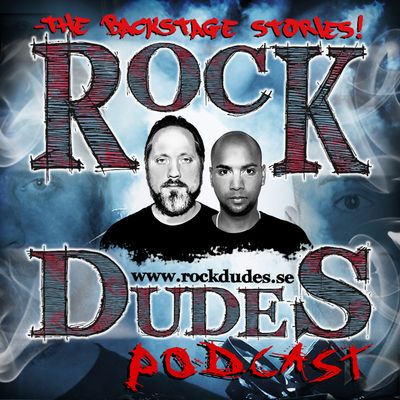 The two multi preoccupied Rock Dudes, Jonas Lööw and Ömer Akay, has started a new podcast at the beginning in Swedish.The podcast Rock Dudes will deliver episodes with guests from the whole music business, especially from so to called backstage areas.The guests is and will be interesting bands and members, different people that works behind the scenes in the business like managers, PR, Radio talk show hosts, Sound engineer, entrepreneurs, etc. All guests have their own cool and interesting stories that would be fun to listen to and they have a lot to learn to people that wanna join the business.Follow us at Facebook, Instagram, Twitter and Youtube: @rockdudespoddenAny questions and requests: rd@rockdudes.seSUPPORT OUR PODCAST by PATREON and/or MERCHSHOP.Support till showen http://supporter.acast.com/rockdudes. See acast.com/privacy for privacy and opt-out information.

Welcome to Rock Dudes #103, and the guest this time is the Finnish Cello-Metal star Eicca Toppinen from Apocalyptica.

Finally I had the pleasure to meet this guy that really brought metal into the classical music room. The first time I saw them was like 1997, on a really small stage playing these Metallica covers in a cello instrumental. It was really different and it was really amazingly good.

Eicca grew up just outside Helsinki in Finland, in a family that was all about music. So it was totally ment for him to become a Celloist, but not maybe in the metal environment.

This conversation was really relaxed and Eicca is a really down to earth type of guy. So you will get the most of his and the bands journey from the mid 90’s until today. And off course we talked about their relation to Metallica, and how Metallica thinks about their way of doing music.

They will release their new album Cell-0 the 10th of January. And just a couple of days after that they will go out on their European special guest tour together with Sabaton and Amaranthe.