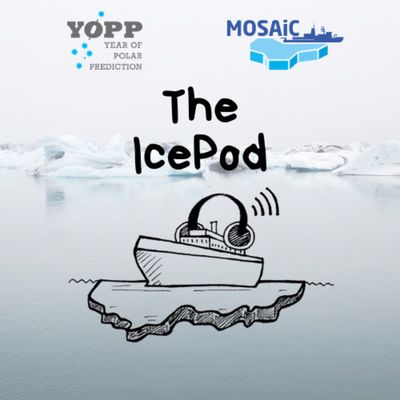 The IcePod is the podcast about polar science and the people. We'll talk to scientists who went on board Polarstern, the German research icebreaker, for the biggest research expedition in the Arctic. The IcePod is the official podcast of the Year of Polar Prediction www.polarprediction.net

Episode Eight – Snowflakes, Pee Bottles and a Mosaic of Floes

In episode eight of the IcePod, we get to hear back from one of our previous guests – Stefanie Arndt who already spoke with us before leaving for the Arctic (Bonus Episode One). After 145 days away from her home in Bremerhaven, she tells us all about MOSAiC expedition leg 3. Stefanie Arndt is a sea-ice scientist at the German Alfred Wegener Institute, and she has a special sense of snow. While Antarctic snow has been her first love, this time Steffi ventured northern fields and flirted with Arctic snowflakes.

After she managed to survive the shortage of muesli brought from her home just at the end of the transit on board the Russian support icebreaker Kapitan Dranitsyn that brought leg 3 to the ice camp during the return of sun, Steffi led Team Ice during a challenging time: Not only it was the coldest leg of MOSAiC but there was lots of uncertainty due to very dynamic ice conditions. In addition, the leg got extended because of the pandemic that let no aircraft leaving from Svalbard for the planned exchange with the next leg. But Steffi and her team adapted well to the altered circumstances, studying spring conditions much longer into the season than expected –  as the days became longer the sea ice energy and ice albedo changed and eventually the MOSAiC ice floe became a mosaic of floes…

What to do when something's becoming very urgent on the ice? Steffi gives some yet unknown insights to the logistic challenges of MOSAiC. Or did you already know that pee bottles were an item due to the no-pee policy for MOSAiC field work?

Even polar scientists are not immune to Arctic temperatures so one has to find a strategy for sampling snow at -40°C. MOSAiC's Smilla had a pretty elaborate way using warming pads and two layers of warm gloves under her pair of plastic gloves to not contaminate the snow. Another way to keep yourself warm is to "walk five hundred miles" across the ice ridges. Luckily, there was always hot tea when returning from a long day out on the camp to a warm and cosy home called Polarstern.

While Corona was affecting life on land, Steffi and the team of leg 3 had still chance to collect hugs before leaving the ice and go back home. Something she could draw on for the months to come...

If you miss the music, find the very special playlist that Steffi created on Spotify: https://open.spotify.com/playlist/2qnVuJVfblT9MjBPg2rhyB?si=e-OjEPiPQeKMaGSMaBhO_A


If you want to listen to the full episode with music, listen to Radio Weser.TV on the first Saturday each month 12–2 pm UTC at https://www.medialabnord.de/radio-livestream/, or check back with us at polarprediction@gmail.com

For updates and other materials, check also our website: https://theicepodcast.home.blog/

MOSAiC Mixdown: mini-podcasts from the Arctic by Sam Cornish
https://open.spotify.com/show/4WSd4ZSXBMZ3TLH1Og90Rc?si=GDbWg4emT36tbkRSAjvD6A

The IcePod is the podcast about polar science and the people. We’ll talk to scientists who went on board Polarstern, the German research icebreaker, for the biggest research expedition in the Arctic. The IcePod is the official podcast of the Year of Polar Prediction initiative to improve weather and sea-ice forecast in the Arctic and Antarctic.