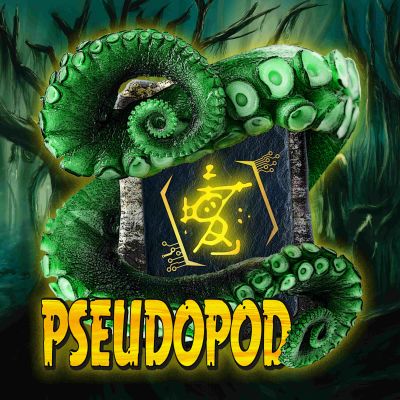 The Sound of Horror. Pseudopod is the world's first audio horror magazine. We deliver bone-chilling stories from today's most talented authors straight to ears.

PseudoPod 743: Flash on the Borderlands LIV: Stage Three: The Bargain

“The Kid Learns” was first published in the New Orleans Times Picayune on May 31, 1925

“If It Bit You” is a PseudoPod original

The Sputtering Wick of the Stars

by Gordon B. White

It is the people in the small towns dotting the countryside who first notice the darkness in the evening skies. One by one, the stars are vanishing. Every night, more are snuffed out: hundreds, thousands, hundreds of thousands of light years away. The encroaching blackness rolls across the horizon like a glacial wave.

As the patch of empty sky grows, eating away the constellations, the world cannot cope. First comes violence, then self-harm; local panic, then global paralysis. One by one the power grids go out, the communication lines fall silent. The darkness spreads across the earth, reflected in the pooling abyss above.

Here in Asheford, in the now-black village center, the remaining congregants gather in the chapel each night, waiting. From sunset to sunrise, the Reverend Mott hovers around the lectern, illuminated by a single large white candle. He rails against the sinners that have brought this plague of shadow, harrowing the sunken-eyed living and the long-since dead.

“Hell is real.” The reverend wrings his hands, casting claws of shadow across his flock as he paces between the candle and the silent mass. “This darkness is the void, the absence of the light of the Lord.”

He stops and crooks his finger at the room. “The Beast is coming for us. A cold, black wind from out of space. The very breath of the Devil is blowing out the stars like candles.”

The flame flickers, and a woman in the pews begins to weep.

But there is a different murmuring in the back of the nave. A man stands, pushing someone away, then strides up the aisle towards Reverend Mott.

“I’m sorry, but I can’t let you go on.” The man reaches the steps and climbs to Mott’s level. “This is all superstition. It’s lies.”

Reverend Mott crosses his arms and roots himself between the man and the fire. “What do you know? Hubris like yours has brought this ill wind.”

“First of all,” the man adjusts his glasses, “there’s no wind in space, ill or otherwise. There’s no air at all. The stars are not being blown out.”

“What, then, is causing the darkness? What is this, if not evil’s breath and the world’s end?”

“Let me tell you.” The man turns to the crowd. “I am a scientist. I know the truth.” He rolls up his sleeves, gesticulating as he speaks. “You see, I’ve studied the universe. I’ve seen it through telescopes in all its wonder and strangeness. I promise you, there is no magic wind; the Devil is not blowing out stars through the reaches of space.”

The man swings his hands in punctuation, forcing Mott to take a half step backwards to keep his balance. The crowd mutters.

“No, instead what it’s doing”—the man licks his thumb and index finger—“is more like this.”

He reaches past the Reverend Mott and pinches the candle’s wick, snuffing the flame instantly and unleashing darkness throughout the chapel.

“But you were right. The Beast is coming.”

If It Bit You

“There’s something wrong with the baby,” Selah said to the doctor, a white woman with cinnamon brown hair that floated untamed around her head in contrast to the white of her doctor’s coat, the sterile everything in it’s place-ness of the office.

Selah didn’t know the woman’s name. She was the the seventh or eighth that she had seen in the thirty weeks of her pregnancy. Every visit to the office, the Woman’s Health Center, she saw a different doctor. And all the techs and nurses. She couldn’t keep them straight.

But she knew she told them, had been telling them since the first fluttering kicks that there was something wrong when she couldn’t ignore it anymore. When she finally forced herself to figure out how to juggle an appointment, work, and the kids. Something didn’t feel right.

Sometimes she thought if she had come earlier, things would have been different but she knew that was wrong. Knew it was always going to be what it was from the moment he smiled at her.

The woman with the wild hair smiled now, wide and soft. She placed her hand over Selah’s much darker one. “It’s your first baby. It’s alright to be nervous. Most new mom’s are. Everything looks good though. All your labs, the ultrasound. You and your baby are perfectly healthy.”

“I’m not a new mom. This is my third baby. I’m telling you something is wrong,” she fought her anger down, swallowed it up and pushed it to her center. She couldn’t let it loose, let it roll over this white woman. She wouldn’t listen if she did.

“Oh!” the doctor exclaimed, her fingers stumbling for the tablet that held Selah’s chart. The chart she had barely looked at. “You look so young! I shouldn’t have assumed,” she let the words trail off as she looked through the system, skimmed the notes. Her smiled dropped, a crease formed in her brow. “You’ve complained a lot but,” she looked up at Selah then, “There’s nothing at all wrong with you or the baby. We’ve told you before.”

The woman’s voice had changed. Gotten hard and Selah swallowed her sigh, forced herself to stay calm. She knew this dance too. “I know but maybe there’s something else that can be looked into? Now that I’m further along. It’s just, this baby, it doesn’t feel right. I don’t feel right.”

Concern again, the woman’s hand on her shoulder. “Every pregnancy is different. Are you getting enough rest? It must be hard with other children. Do you have help at home?”

She closed her eyes, let the sigh loose this time. “No. I haven’t been sleeping. I have these dreams, nightmares. They wake me up. I don’t live with anyone.”

“About the baby?” the woman asked.

“No. Yes. I don’t know. There’s fire and this strange sound that almost seems like singing. And so much pain.” She gripped the fabric of her leggings in her fists, overwhelmed with the memory of it. She didn’t know why she told the woman, she had to tell someone. She had to hope they would listen.

“Pain?” the doctor perked up, latching on to something she could understand, monitor. “Are you in pain?”

“No. It’s not that. In the nightmare I just know there’s pain.”

“So your baby and body feel fine?”

She considered laughing, forced it down to live with her anger. “No, not really. There’s something wrong. When it moves, it’s just wrong. Like there’s too much of it.”

“Women with gestational diabetes often have larger babies but we’ve been keeping on eye on them and-.”

“I don’t have diabetes. I’m telling you, there’s something off!” Selah looked away, dug her nails into her thighs. She shouldn’t have raised her voice, shouldn’t have snapped. The woman wouldn’t listen now. She had already lost.

“You’re tired. The stress of an unplanned pregnancy can be a lot to handle alone. I encourage you to reach out to family for help and let me just,” she looked back at the tablet, made a note. “Help you get connected with some mental health services. They’ll have a few numbers for you to contact at check out, alright? There’s nothing wrong with the baby.”

“It wasn’t unplanned. I didn’t plan it but something did,” she mumbled.

“What?” the doctor asked, hand on the door.

“Nothing, thank you,” she answered.

The woman was gone and the baby in her twisted and danced all wrong against the walls of her womb. She closed her eyes and saw fire and blood and pain and there was no baby for her to hold.  She touched her belly and wondered if she had prayed more if it would have kept the devil away.

But she knew it wouldn’t have mattered. Knew he picked her because everyone thought her babies, born Black and fatherless, were damned already. No one would listen to her pleas that this one really was.

The post PseudoPod 743: Flash on the Borderlands LIV: Stage Three: The Bargain appeared first on PseudoPod.