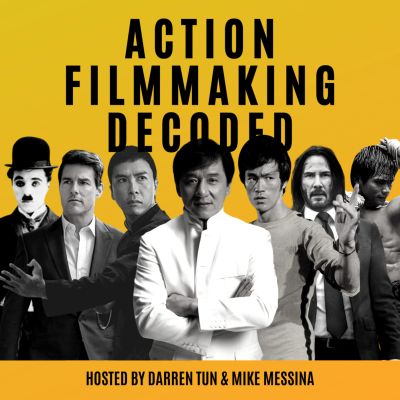 Introducing: Justin Eaton, stuntman and double in Banshee, Dr. Strange, Daredevil, and The Punisher. He was Emmy nominated for his stunt performance as Captain America John Walker in Falcon and The Winter Soldier. He is also married to CC Ice, double for Black Widow and Scarlet Witch!

In this episode, we discuss his work as Bloody Face on American Horror Story, scaring people on set with his monster makeup, and receiving an action stunt crash course for Bunraku. We also dive into his work relationship with Dave Macomber, having tattoos as a stunt performer, and that time he stretched his shoulder muscles til they "plucked" like the violin bow strings.

We also breakdown Banshee’s pit fight as well as the action short Identity Crisis which was filmed over two weekends with the Banshee action team!

In Part II, we’ll be going in depth about Daredevil, Deadpool, and Doctor Strange. We’ll also be breaking down action sequences from Falcon and the Winter Soldier.

Join us as we chat with Justin Eaton: The Wicked Lion of Stunts.

If you enjoyed this episode, you can support us at Patreon.com/actionfilmmaking

Subscribe and leave a review on Apple Podcasts, Spotify, or the podcast app of your choice

Until next time, thanks for listening