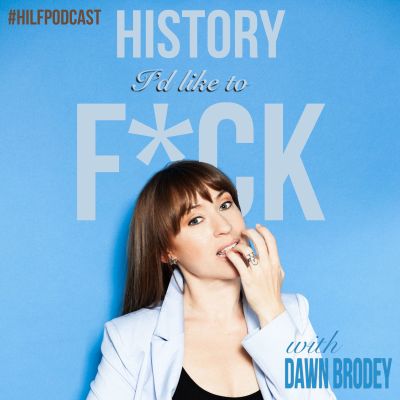 Host, comedian Dawn Brodey, takes you through the annals of history with a special guest and history subject each episode. From Dillinger to Frankenstein, from The Crusades to Freak Shows - Dawn brings her history degree and unfiltered sense of humor to deliver well-researched deep-dives that strip history naked and serve it up raw.

John Dillinger’s career was short.  The time between his first bank robbery and his killing by the FBI on the streets of Chicago, was just under 21 months. His impact on American culture, however, is immeasurable. He was especially handsome, conspicuously charming and ever-bold in his actions. As the Great Depression worsened - as far as the general American was concerned - a polite gun-slinger who was always kind to ladies, just didn’t look that bad compared to the banks he was robbing.

Guest, Kat Perkins, is a prolific singer-songwriter out of the Twin Cities and also a top-five finalist on The Voice. Kat chose Dillinger because as a Midwest girl born-and-bred she has always heard stories of the various outlaws that roamed her familiar streets. Together, old friends Dawn and Kat, enjoy a sexy jaunt into some of the sexiest episodes surrounding his life and death… and have a few beers doin’ it.

00:02:08 - The History of Kat Perkins! From her time on The Voice, to her the summer camp for kids she started, to her many tours with the USO.

00:19:00 - Of all the fascinating characters of this time, why do we remain so obsessed with Dillinger, specifically?

00:21:20 - John Dillinger’s Childhood antics lead him to a stiff prison sentence and a whole new career.

00:25:51 - Dillinger helps break his friends out of Indiana, just in time for them to break him out of Lima, Ohio.

00:30:00 - John Dillinger is taken to prison in  Crown Point, Indiana - from which he daringly escapes within two months.

00:37:38 - The BOI becomes the FBI and Dillinger’s girlfriend, Billie Frechette, gets arrested.

PART 2 - Public Enemy Number One... is the Loneliest Number.

00:41:50 - The Dillinger Gang goes to a resort in Little Bohemia, Wisconsin - and the FBI fucks up big time.

00:50:17 - John Dillinger’s crime land friend and member of the gang, Red Hamilton dies an agonizing death after begin shot in the back. Hope is erased…

00:52:04 - While in Chicago living under an alias, Dillinger falls for Polly Hamilton and makes the acquaintance of Ana Sage - the Woman in Red.

01:08:50 - A post-sign off extra where Kat gives us some insight into how she conceived of our theme music!

HILF Podcast on Instagram  -Go here to see lots of photos and updates on guests and research.

**We are a new podcast and still growing and learning. More resources and links will be available... as we get better at this. Thanks for listening and please reach out to let us know where you are and what you want us to F next.