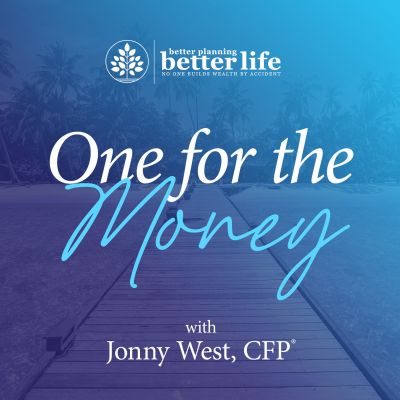 One For The Money

Listen to hear Jonny break down the tips, tricks, and strategies he uses to help clients retire early. This is the "easy button" when it comes to early retirement because everything you want and need to know is right here. Jonny will lay it all out in plain English so you can get the details on the actions you can do to put yourself on the best path to early retirement. He'll also interview top real estate, tax, and estate planning and other professionals to provide a comprehensive approach to your retirement planning. Nobody builds wealth by accident. Listen to find out how you can do it on purpose.

This episode is part two of my series summarizing how income taxes work. I know taxes may not be the most exciting topic, but I share this with you because you don’t pay less accidentally. Instead, paying less in taxes results from being proactive in your approach and executing strategies over many years. You’ll want to listen so you can take advantage of these tax-saving strategies.

In this episode...
An intro to tax brackets

In episode eight, I went over the stages income goes through before taxes are applied. All income received in total is called gross income, and, provided certain adjustments are made, taxes aren’t owed on that entire amount. These adjustments would include IRA, retirement plan, and HSA contributions. After these adjustments are made, the income is called adjusted gross income, and taxes aren’t applied to that amount either. There’s one more phase called the deduction stage, for which there is either the standard deduction or itemized deduction.

Once income has gone through these adjustments and deductions, the remaining income will be taxed. Here in America, those who earn more income pay a higher tax percentage. This system is what’s called a progressive tax code. Under current tax law, portions of a person’s income are taxed at different rates. Each level is called a tax bracket or marginal tax rate, which aren’t necessarily the most self-explanatory terms. Averaging an individual’s tax rates will result in what’s known as the effective tax rate.

Choosing the best time to pay taxes is especially important with retirement accounts because those amounts are only taxed once. People in a lower income tax bracket will want to pay taxes now if they expect to be in a higher tax bracket in retirement. This situation could occur for people who are early in their careers or semi-retired with a reduced income. For those in a higher income bracket now than retirement, it would be more advantageous to make contributions that will be taxed later.

A great example of this is setting up accounts for clients’ children. I have helped them start Roth IRAs because the children are very early in their careers and would pay less in taxes now. Clients who are retiring in their mid-fifties who have a pension plan that starts at age 65 will have a higher income in retirement. Over the years before their pension began, we do Roth conversions where we convert a portion of their traditional IRA from a pre-tax basis to a Roth. I’ll explain more on Roth conversions in a future episode.

Business-owners and the Augusta Rule

This strategy is commonly referred to as the Augusta Rule, as it was created to protect the residents of Augusta, Georgia. The good news is that all of us can benefit from this provision of the tax code. Section 280a of the IRS tax code allows all homeowners to rent out their primary residence for up to 14 days per year without reporting the rental income on tax returns. The residence could be rented to individuals looking to stay on vacation, or you could rent to a business owner who intends to use it for business purposes such as a retreat or meeting.

Even business owners can rent their homes to their businesses. Employing the Augusta Rule can be an effective strategy for moving income away from your business and shifting it to personal income where there would be no tax consequences. The corporation can deduct the rent on the business tax return if the total rental does not exceed 14 days and the rent is reasonable. The business owner wouldn’t have to report this income on personal taxes.

Audio Production and Show notes by