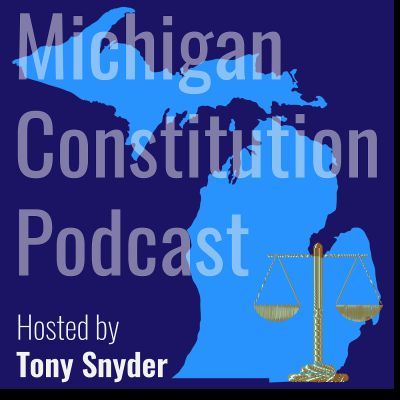 Tony Snyder is a licensed attorney in the State of Michigan who offers a bi-monthly podcast on the Michigan Constitution. Here you will learn about each Article and its respective Sections, what they mean, and case law that has addressed how those provision are implemented in the day-to-day lives of citizens of Michigan.

There’s been a lot of chatter about the notion of Bail Reform. Realistically, bail doesn’t need to be reformed, certainly not in the State of Michigan. But my guess is most people championing for this “solution in search of a problem” don’t understand how bail actually works. We’ll discuss that in great deal. But here’s a primer:

So what is bail? What’s its purpose and why is “Bail Reform” getting all the press attention these days? To being, and simply put: The primary purpose of offering bail is BOTH to ensure that the defendant appears in court, while also ensuring the safety of the public.

At the defendant’s first appearance before the court, the judge must order that the defendant be held in custody or released on bail. You are “bailed out of jail” with the posting of a financial security, or, in laymen’s terms: posting bond. There are three types of bail for which a bond is required: cash bail (which just means posting 10 percent of that dollar amount), there’s secured bail, and finally, there’s unsecured bail (a/k/a personal recognizance). Complete denial of any bail is permitted only under certain circumstances, discussed in just a bit.

So how does this usually work, you wonder? If the defendant is going to be released while her trial is pending, the court must determine whether or not she will be released on her own recognizance or whether bail will be required. And, if bail is going to be required, the judge must establish an amount of bail the defendant must provide. Generally, the court will order release on a personal recognizance. Alternatively, the court could make specific findings in order to impose conditions on release and thusly order the release of the defendant on money bail. Or, if the court determines for reasons it states on the record that the defendant’s appearance or the protection of the public cannot be otherwise assured, complete denial of bail may be ordered by the Judge.

If the defendant is not ordered to be held in custody, the court can order the release of the defendant on her own personal recognizance, with the understanding that the defendant will appear as required to each court hearing, that she will not leave the state without permission of the court, and she will not commit any crime while released.

If the court determines that a release on personal recognizance will not reasonably ensure the appearance of the defendant as required, or will not reasonably ensure the safety of the public, then the court may order a pretrial release of the defendant on the condition or combination of conditions that the court determines are appropriate. What are some of those conditions, you may wonder? Think things like: checking in with a probation agent, not using legal or illegal substances such as alcohol and marijuana, obtaining employment, attending treatment programs for dependency, those sort of requirements.

If the court determines for reasons it states on the record that the defendant’s appearance or the protection of the public cannot be otherwise assured, money bail, with or without conditions, may be required.  When setting money bail, the court must recognize that there is a constitutional mandate excessive bail shall not be required. Money bail is deemed “excessive” if it is in an amount greater than reasonably necessary to adequately assure that the accused will appear when her presence is required. The court in fixing the amount of the bail shall consider and make findings on the record as to each of the following:

(a) The seriousness of the offense charged.

(b) The protection of the public.

(c) The previous criminal record and the dangerousness of the person accused.

(d) The probability or improbability of the person accused appearing at future court proceedings.