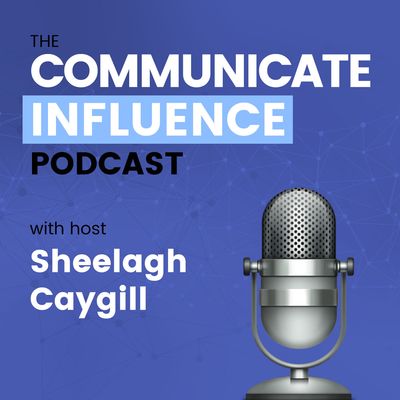 We explore the essential aspects of communications, marketing, and writing. Podcast interviews with thought-leaders look at important influences that shape a PR pro’s or marketer’s work and creativity for the better. Show host Sheelagh Caygill uses her experience as a journalist to ask guests probing questions, often revealing little-known tips and insights. Episodes always offer listeners solutions to common problems and actionable tips. Sometimes the topics we explore will have a less direct impact on our immediate goals, but they still matter. Episodes have delved into communicating with influence, enhancing leadership communications, and the connection between emotive content writing and poetry. Our guests, just like our listeners, are global. As much as possible, we go beyond international borders and engage in issues affecting PRs and marketers around the world. We feature trend updates, such as the growing force of artificial intelligence in communications and marketing, working on climate reality campaigns, and dedicated leadership support for reputation management and a powerful brand presence...

episode 16: How to Set Up a Successful Brand Ambassador Program

The secrets behind brand ambassadorship

This week's episode of The Communicate Influence Podcast focuses on Peter Barron, a journalist and author based in the North of England. Pete was Editor of The Northern Echo, a regional newspaper with an impressive history, for 17 years. He then set up his own media relations firm four years ago.

[Consider giving a small tip: If you enjoy this podcast, please consider leaving a tip at Buymeacoffee.com or Patreon. Thank you!]

More recently, Pete has become a brand ambassador for a local financial institution called the Darlington Building Society. Pete discusses his role as editor of the prestigious newspaper, how he focuses on connected with the community while an editor, and his work as an ambassador. He explains how he performs his role as ambassador, how to set up an ambassador program, and what to look for in an ambassador.

Pete is also a children's author and has written The Dad At Large books, based on his column, and, more recently, The Monstrous Morals series, available on Amazon. His work as a writer has played a role in his ambassador role, as you'll hear in this episode.

Who makes a good brand ambassador?

This episode is a bit longer than average, and that's because we wanted to explore the kind of career, qualities, and reputation a brand ambassador needs to be successful.

And, an admission from the host, Sheelagh: "It was great to catch up with Pete because I reported to him for about six years in the early days of the internet. Back then, my title was New Media Editor - and it was that job that got me switched on to the excitement and potential of all things online."