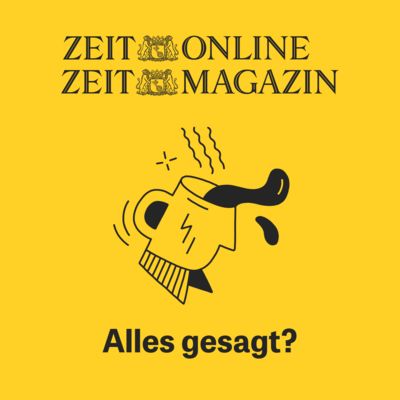 episode 39: Paul Auster, Can You Tell Us the Story of America?

Paul Auster, one of the great American novelists, is our guest on the fourth English-language episode of "Alles Gesagt?" ("Nuff Said?"), ZEIT‘s never-ending podcast. Paul Auster is a film director, a translator, and a writer of poems, screenplays and essays. He had his breakthrough with his first memoir "The Invention of Solitude" in 1982, which was followed by the international bestseller "The New York Trilogy" between 1985 and 1986. He has published more than 30 books in over 40 languages, with his latest novel, "4 3 2 1," appearing in 2017. Last year, he compiled the collection "Groundwork: Autobiographical Writings."

In 1995, Auster wrote the screenplay for the movie "Smoke," starring Harvey Keitel, and co-directed the follow-up film "Blue in the Face" featuring Harvey Keitel again, along with Michael J. Fox, Madonna, Lou Reed and many more.

The hosts of Alles Gesagt?, Christoph Amend, ZEITmagazin‘s editorial director, and Jochen Wegner, editor-in-chief of ZEIT ONLINE, both based in Berlin, met with Paul Auster, who lives in Brooklyn, New York, via video call on February 2, the day before his birthday. The episode was also streamed live on ZEIT ONLINE.

Paul Auster was born in Newark, New Jersey in 1947. He graduated from Columbia University in New York before moving to Paris in 1970. He returned to New York four years later. In this episode of our podcast, Auster talks about the history of the United States and its current political situation, how he became a writer and his path to directing movies late in life. He also tells the true story of a near-death experience as a teenager that shaped the way he thinks about life. Auster explains the magic of Laurel and Hardy‘s comedy and the magic of his marriage to novelist and essayist Siri Hustvedt. The couple has been married for 40 years and are each other‘s first readers. After two hours and 31 minutes, Paul Auster ends the recording. Because at "Alles Gesagt?" the conversation is only over when the guest says it is.